Remembering Those We Have Lost... 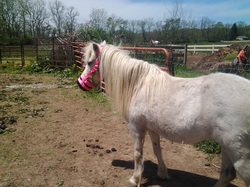 Tatertot is a 27 year old welsh pony cross mare. She was VERY skinny when i got her and as you can see she has gained back ALL of her weight. We were going to adopt Tatertot out but have decided to let her live out her days here in peace. She has behavioral issues and cannot be safely placed into a home. She will stay at the rescue until God calls her home.

Tatertot has been diagnosed as IR/cushings and also had a bout of laminitis. She has been sent to the dry lot for life. She is doing well since then!

Tatertot was humanely euthanized on October 14 at 5:30am after a battle with some colic issues! RIP Tatertot! 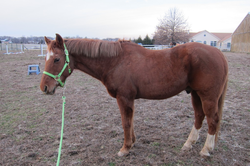 Chase is an awesome horse. He is 23 years old and 14.2 hands tall. He is broke to ride w/t/c, kidsafe, bombproof and looking for that special someone! Is a bit girthy but once its on he is fine. He does require a senior feed and alfalfa pellets mash as he does not have many teeth, but dont let that stop you. He is an awesome guy! Would be good for a kid moving up from a small pony to something bigger or a beginner adult looking for a confidence builder. Cannot carry more than 150-160lbs comfortably at this time. He is UTD on farrier, worming and teeth. Adoption fee is $0 to approved home! GET YOUR APPLICATIONS IN TODAY!!!!
http://www.youtube.com/watch?v=N3yaajiQAD8
http://www.youtube.com/watch?v=ua6FyU69tGA&feature=related

Chase will be heading to a retirement home with Pam! YAY! Congrats! 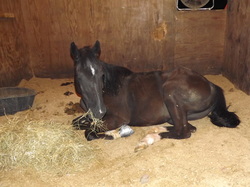 This girl was saved from shipping to slaughter and is said to be in foal and approx. 10 months a long. She will be arriving tomorrow April 9. Will update more once we know more! Stay tuned for more updates! UPDATE: She is here and settling in. She definately appears to be in foal. Already starting to bag up. She has a bit of a cough and snotty nose today so will be monitoring her! She needs a good foot trim and possibly a float! UPDATE: 4-12: Foal is VERY active! Alive and doing well! UPDATE 4-24: Esme is doing great. Had her feet done, had her teeth done, now we are just waiting! She is doing well! UPDATE: Esme had turnout today and she REALLY enjoyed it! We are still waiting for her foal. Her reported due date is May 12. She is progressing nicely!
UPDATE 5-13-12: Esme is making great progress. We should see a foal soon!
UPDATE: 5-30-12 Esme delivered a HUGE colt at 11:06pm on May 30. Baby is doing fine but Esme has hit some road blocks. She is on many meds to help and we are taking it 1 day at a time
UPDATE: 6-26-12 Esme and Bogart are doing great! Bo is growing almost daily and is definately going to be a big boy! Esme is doing great and loves her baby!
UPDATE: 7-13-12 Esme and Bo are doing wonderful! Esme is healing and doing better each day. Bogart is a real ham and is going to make someone an awesome horse some day!
UPDATE: 8-4-12 Esme and Bo are currently at a facility for foundered horses to help bring her feet the rest of the way to healed! They are both doing great and Bo is growing daily!
UPDATE: 8-30-12: Esme has been in rehab for 1 month at a specialist facilty. She is making some strides forward but some days takes a few back. But we are continuing to move forward and taking it 1 day at a time. And Bogart is doing well, growing daily and loving life! Look for Bogart to be available in about 2 months! He is 3 months old today! Happy 3 month Birthday Bogart!
UPDATE: Esme sadly lost her battle on December 14 and crossed the Rainbow Bridge surrounded by MANY people who loved her! <3 RIP Esme!


Sponsor for month of October: Kandi Leigh! Thank you Kandi! 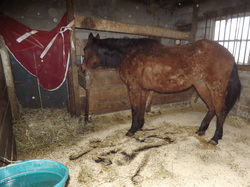 This girl was an owner surrender. She needs quite a bit of mental rehab at this time. She is a stall weaver and a fear kicker. She might be up for adoption at a later time! Keep checking back! UPDATE 10/17: Flicka had her teeth floated. Her mouth was a mess. She was a good girl. Hopefully she can eat better now! UPDATE 10/26: We are having an issue with her keeping weight on. Her teeth were floated and she is getting senior feed and free choice hay at this point but seems to be losing some weight. We are hoping to get this figured out soon! UPDATE 11/11: She is gaining weight well! Has settled in and doing great! We are hoping to find a foster/sanctuary placement for her with an experienced handler. UPDATE 1/2/12: Flicka is doing great! She got probiotics for a 2 week period about a month ago and is doing phenominally and gaining weight well! UPDATE 2-17-12: Flicka was seen by a vet today for some neurologic signs. Her prognosis is not good. Vet feels she had an old injury in her neck and the scar tissue is causing pressure on her spine. We are going to try and few days of pain managment and go from there but it might be time to let her cross the rainbow bridge! Will keep updated as we know more! UPDATE 3-8-12: FLICKA HAS CROSSED THE RAINBOW BRIDGE! SHE IS NO LONGER IN PAIN AND CAN RUN FREELY! RIP FLICKA 1977-2012 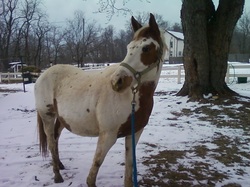 Sierra came in from a kill pen. She is about 8-9 months pregnant and due to foal soon! She currently has an upper respitory infection which is being treated with antibiotics! UPDATE: SIERRA UNFORTUNATELY SUFFERED A GRAND MAL SEIZURE AND HAD TO BE EUTHANIZED! RIP SIERRA AND PALOMA BLANCA 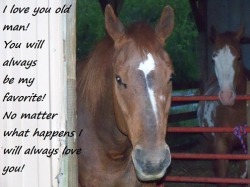 RED WAS LAID TO REST TUESDAY SEPTEMBER 14, 2010....HE WILL BE MISSED FOR EVER! RIP BIG BOY! Big Red is a 28 year old qh gelding. He is a permanent resident of the farm. He was here before we started the rescue as my personal show horse and was retired from the show ring at age 24.

In Memory of Those We Lost! You will live on forever in our hearts!